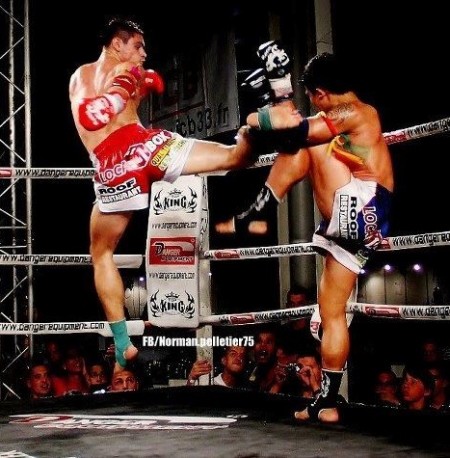 Muay Thai, also known as Thai Boxing is Thailand’s national sport and cultural martial arts. It is an ancient art of self defense, intertwined with Thailand’s history and culture. It was developed several hundreds of years ago as a form of close-combat technique that utilizes the entire body as a weapon. Today, Muay Thai has grown into a popular sport, not just in Thailand but all over the world. Muay Thai’s history dates back in as early as the Buddhist years in 1238 when the first Thai army was established in the northern city of Sukothai, Siam, being its capital. History records showed that there was a need to defend the capital city at that time, as spawned by many wars being fought between the neighboring tribes and kingdoms. As such, the Siamese army was created to give protection to the government and its people within the surrounding villages and the city. As part of the preparation, soldiers were taught hand-to-hand combat using fists, feet, knees and elbows, the use of weaponry and how to use the entire body as a fighting weapon. This training is what eventually evolved into Muay Thai and Krabi Krabong that people know today.

Since then, it has become ingrained in the culture of the early Siamese people to learn the military arts or Muay Thai. The constant threat of war had prompted the people to put up training centers throughout the kingdom. These were the first-known Muay Thai camps where young Siamese men practiced the art form for different reasons – self-defense, discipline and exercise.  The Thai monks even instructed at many Buddhist temples, passing down knowledge and history from one generation to the next.

These Muay Thai camps gained popularity among the poor and common people. It also became a rite of passage for Thai men to take up Muay Thai training. This, according to stories, is believed to have been made mandatory by one of Thailand’s most celebrated warrior-heroes, King Naresuan the Great, who is said to be an excellent boxer himself. It has also been made a requirement for the high-class and the royalty. Even the two sons of King Phokhun Sri In Tharatit – the first King of Sukhothai, were sent to the Samakorn training center to learn the martial arts. It was a common notion that good warriors made brave leaders. Learning Muay Thai will prepare them as future rulers of the kingdom.

The Era of King Narai

It is during this era that Muay Thai became a national sport and has remained a national tradition for the next 400 years. The headband called the “Mongkong” and the armband called “pa-pra-jiat” were both introduced during this era. The first “Muay Thai fighting ring” was made by laying a rope on the ground in a square or circle as a designated fighting area.

Another royalty who loved competing in Muay Thai was King Prachao Sua. He often disguised himself as a commoner when he entered tournaments in small cities and villages. And because of the disguise, no one recognized him as the King, he was allowed to participate in a tournament against several notable fighters.

During this period, Thailand began to see peace and the kingdom was slowly being reconstructed. Training in Muay Thai was generally for military soldiers and as a favored past time for those not in the military. The community’s new found peace had turned Muay Thai sport to be more competitive.

The Ratanakosin, King Rama I,

During these eras, Muay Thai had become a national fighting art and rules and regulations were introduced. The sport had become an integral part of celebrations and festivities across the country. During the reign of King Rama I, a competitive fight between a French and Thai fighters was arranged at the Grand Palace where a bet of 4000 Bahts or 50 changs. But the French fighter’s brother broke the rules by jumping into the ring when he felt that his brother was losing the game and which resulted into fighting between the foreigners and the Thai guards and spectators.

The Reign of King Rama V

This was considered the golden age of Muay Thai with King Rama V personally promoting the sport from the late 1880?s to the turn of the century. Many times, the top fighters at the Royal Muay Thai Centers would be given personal invitations by the King to fight at tournaments, festivals and important international events. In 1887 the Department of Education was created making Muay Thai as part of the Military Cadet teachers’ school curriculum. Muay Thai uses all eight weapons – hands, feet, knees and elbows and is often referred to as “The Science of Eight Limbs”. Many consider Muay Thai as the most effective stand up fighting art on Earth. Muay Boran or the Old Style Muay Thai includes the head as the 9th weapon.